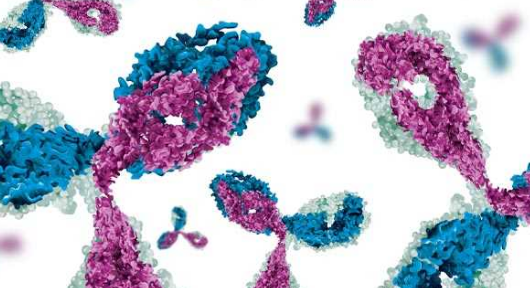 The bispecific antibodies combine the specificity of two monoclonal antibodies, can bind simultaneously to different antigens or distinct epitopes within the same antigen.

In this entry we summarize 4 fundamental aspects to know the characteristics and functionalities of bispecific antibodies .

1.- WHAT ARE BISPECIFIC ANTIBODIES?

Bispecific antibodies are antibodies with the ability to specifically bind two different antigens or two epitopes of the same antigen simultaneously.

This characteristic confers certain functional advantages on monoclonal antibodies, such as the ability to:

2.- HOW ARE BISPECIFIC ANTIBODIES OBTAINED?

Bispecific antibodies can be generated by three methods:

This technique is based on the fusion of two different hybridoma lines, giving rise to a new cell line known as quadroma that will produce bispecific immunoglobulins.

It consists of the conjugation of two different purified monoclonal antibodies.

Using recombinant DNA technology, it is possible to adjust characteristics such as size, valence, flexibility or half-life to obtain the bispecific antibodies that best fit the application of interest. Through this technique, more than 50 different formats of bispecific antibodies have been produced.

3.- WHAT TYPES OF BISPECIFIC ANTIBODIES ARE THERE?

Bispecific antibodies can be classified into two broad categories, within which different structural formats can be found:

The Fc region facilitates the purification of these bispecific antibodies, contributes to improving their solubility and stability, and confers effector functions mediated by that domain.

In this case, the bispecific antibodies completely depend on their ability to bind to the antigen to exercise their function.

4.- WHAT ARE THE CLINICAL APPLICATIONS OF BISPECIFIC ANTIBODIES?

Bispecific antibodies, due to their ability to act as bridges between drugs or T cells and targets such as tumors, as well as their ability to simultaneously block different pathogenic mediators, have great potential as therapeutic tools in diseases such as cancer, autoimmune pathologies or inflammatory diseases.

The most relevant clinical applications currently being investigated include:

The magnitude and breadth of the body’s immune response is regulated by balancing co-stimulatory signals and inhibitory signals that prevent indiscriminate attack on self-antigens by preventing autoimmune diseases. These signaling pathways are collectively known as immune checkpoints .

Cancer cells have developed resistance by expressing antigens on their surface that the immune system recognizes as endogenous, thus preventing tumor cells from being recognized and neutralized.

4-1BB is a transmembrane protein that is expressed on the surface of T lymphocytes, NK cells, dendritic cells, granulocytes, and mast cells. By binding to its 4-1BBL ligand it provides co-stimulatory signals to CD4 + and CD8 + T cells.

4-1BBL is a protein that is part of the TNF superfamily, and is expressed on the surface of dendritic cells, macrophages, and activated B and T lymphocytes. The interaction of 4-1BBL with 4-1BB provides co-stimulatory signals to CD4 + and CD8 + T cells.

CD 40 protein is expressed on the surface of antigen presenting cells such as dendritic cells, B cells, macrophages and monocytes, as well as epithelial cells and in a variety of tumors.

By binding to its CD154 ligand, it acts as a co-stimulator for activation of B cells, dendritic cells, monocytes, and other antigen presenting cells.

The CD47 protein is expressed on the surface of B and T lymphocytes, monocytes, platelets, and erythrocytes, as well as on non-hematopoietic cells. CD47 is involved in a multitude of cellular processes including apoptosis, proliferation, adhesion, and migration, and has been found to be overexpressed in a multitude of different tumor cells.

The CD80 protein is mainly expressed in activated B cells. It binds to CD28 to provide the necessary co-stimulatory signal for T cell activation and cytokine production. It also binds to CTLA-4 which inhibits T cells.

The CD86 protein is expressed on the surface of activated B and T cells, macrophages, and dendritic cells. It binds to CD28 to provide the necessary co-stimulatory signal for T cell activation and cytokine production. It also binds to CTLA-4 which inhibits T cells.

The CD276 protein is weakly expressed in lymphocytes, macrophages, dendritic cells, epithelial cells, osteoblasts, and some tumor cell lines. The most recent studies suggest that this protein negatively regulates the response of T cells.

The CTLA-4 protein is expressed on activated B and T lymphocytes. Structurally, it is similar to the CD28 protein, and both bind to the B7 family ligands: B7-1 (CD80) and B7-2 (CD86). Upon binding, CTLA-4 negatively regulates the cellular immune response.

The LAG-3 protein is expressed in activated T lymphocytes, NK cells, and regulatory T cells. Its main ligand is MHC class II, to which it binds to produce a response similar to that of CTLA-4 or PD-1. It also contributes to the suppressive function of regulatory T cells. In contrast to inhibition, LAG-3 has also been shown to promote the immune response by activating antigen presenting cells.

In vivo treatment with an OX40 agonist antibody promotes the generation of antigen-specific effector T cells and prevents the induction of T cell tolerance.

The OX40L protein is expressed in activated B cells and in antigen presenting cells. It is the OX40 (CD134) ligand, which regulates the clonal expansion of CD8 + and CD4 + T cells.

The PD-1 protein is transiently expressed in CD4 and CD8 thymocytes as well as in activated B and T lymphocytes and in myeloid cells. PD-1 expression decreases after successful removal of the antigen. PD-1 has two ligands, PD-L1 and PD-L2, both of the B7 family. Upon binding to these ligands, it inhibits T cell activation, reducing proliferation, cytokine production, and T cell death.

Antibodies against immune checkpoints that block the interaction between PD-L1 and its PD-1 receptor fight tumor growth in murine melanoma models.

PD-L2 is a transmembrane protein belonging to the B7 family, which is expressed in monocytes, macrophages, and dendritic cells. It binds to its PD-1 receptor by inhibiting TCR-mediated T cell proliferation and cytokine production.

TIM-1 is a type I cell surface glycoprotein, which is primarily expressed in TH2 cells. It is a stimulatory molecule for the activation of T cells. It is involved in the mediation of the immune response against viruses, allergic reactions, asthma or tolerance to transplants.

The TIM-3 protein is specifically expressed on the surface of Th1 lymphocytes, and is activated by its binding to galectin-9, inducing apoptosis of Th1 cells.

Inhibition of TIM-3 signaling in mice has been shown to exacerbate autoimmune encephalomyelitis, promote IFN-producción production, and induce proliferation of Th1 cells.

TIM-3 mediated signaling is also being studied as a target for cancer immunotherapy, since CD8 + T cells expressing both TIM-3 and PD-1 exhibit greater defects in cell cycle progression and production of effector cytokines compared to cells expressing PD-1 only.

The VISTA protein, also known as PD-1H or B7-H5, is a type I membrane glycoprotein. It is expressed in activated T cells, NK cells, macrophages, dendritic cells, and neutrophils. It works as a negative immunomodulator, suppressing T cell cytokine production.

Assessment of Autozygosity Derived From Runs of Homozygosity in Jinhua Pigs Disclosed by Sequencing Data. Autozygosity and Genetic Differentiation of Landrace and Large White Pigs as Revealed by the Genetic Analyses of Crossbreds. Effects of autozygosity and schizophrenia polygenic risk on cognitive and brain developmental trajectories.

Should we worry about E484K & other mutations? Yes! That's why so many of us are working hard to study them. But we need to keep perspective. Reduced neutralization does not mean no immunity, & it will take careful study to determine implications for protection in humans. (6/n)

What is the relevance of viral load in #COVID19 disease severity? A very talented @YaleMSTP student @SilvaJ_C found that saliva viral load to be a better predictor of disease than nasopharyngeal viral load. Here is a thread to explain the findings. (1/n)

#postdoc position available immediately in my lab to develop, assess and do Covid-19 testing! RNA based diagnostics. Please email if interested!